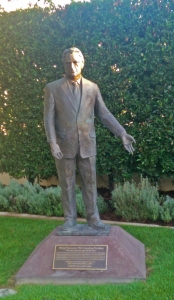 Recently, Dr. Philip Pumerantz, President of Western University of Health Sciences, announced his retirement. Even though I have not had the privilege of working directly with him, my nearly six years of contact with him as an employee have provided some valuable lessons.

Dr. Pumerantz founded Western University, starting with the humble beginnings of the College of Osteopathic Medicine of the Pacific in 1977. In the intervening years, the university has grown to include nine colleges of various health science disciplines.

These colleges form a well-integrated, innovative university. We have been a pioneer in interprofessional education in the health sciences. But each college is also making a name for itself within its own discipline in health education. Our College of Dental Medicine, where I am employed, is a trendsetter in dental education.

Our clinic facility includes clinics for dentistry, podiatric medicine, osteopathic medicine (family practice), optometry, and an interdisciplinary diabetes center, along with a full-service pharmacy. Each is manned by students who are guided by capable faculty and staff.

All of this is noteworthy enough, but by itself, it would not motivate me to consider a tribute. Rather, it is the man himself, Dr. Pumerantz, who inspired me to write this. I believe that we as leaders can learn much from this great man.

Allow me to share what has been most significant to me.

Dr. Pumerantz is a man of vision: he is always looking beyond the horizon. He has surrounded himself with capable men and women who have caught his vision and have helped him to make it a reality. Many of these individuals are innovators in their own right, and have been given the freedom to develop excellence in their own programs.

He is appreciative. Each year, on the anniversary of my hire, I receive a thank you note. This was a very pleasant surprise at the end of my first year. In conversations with us, he seems to find something to thank us for. His attitude helps me to realize that my contributions do not go unnoticed.

He has created a culture of friendship among all university employees. For lack of a better term, he has fostered a “Hilton culture” at WesternU, where nearly everyone is happy to help out. Whether it is the maintenance crew, the mailroom staff, security, doctors, or anyone else: we all greet one another and treat each other well. This culture was well established before I joined the faculty, and that made it easier for me to adjust to academia.

Dr. Pumerantz is an example of community involvement and community service. Indeed, this is a key point of our success. We put on health fairs and screenings and serve in many other ways. Applying students must show a track record of service in order to be admitted! Not the least noteworthy here is how we as a university have helped to revitalize downtown Pomona. Because of what Dr. Pumerantz has done in the community, I was once thanked by the Mayor of Pomona for all the good we do for the city.

Dr. Pumerantz is approachable. He doesn’t stay in his ivory tower. He will go out of his way to chat with any of us. Many university presidents can’t be bothered with that. He embodies the principle of MBWA: management by walking around. Many of my co-workers have told stories of kind conversations with him.

Frequently when I have been out walking, I have heard him call out “Hello, Professor!” He always had questions about how I was doing, how my family was, how the College was doing – he showed an interest. And I always felt appreciated.

At a social event, he stopped me, my wife and my daughter, and praised my efforts in building the university. At that point my daughter wanted to be a veterinarian. When he heard that, he made an effort to track down an administrator who could be a key contact for her. He was unable to locate the individual, but his effort and his concern were very much appreciated.

Dr. Pumerantz is known for his hospitality. He has hosted various events for faculty and staff during the academic year. During our orientation week, which he calls Welcome Week, he and his wife host an ice cream social because they want to greet all the incoming students and thank them for coming here. For many years this was held in his back yard, until we became too big. Now it is held on campus. But in spite of poor health, they continue to attend.

And following our opening ceremonies at the end of welcome week, he hosts a barbeque for the new students and their families, along with faculty and staff.

Finally, I have never heard Dr. Pumerantz speak publicly without praising his wife, Harriet. She has been his partner and his support, and has shared all of his achievements. He is quick to point out that he would not be where he is without her. If each of us were as quick to praise our spouses, this would be a better world.

I don’t want to claim that he can walk on water: I only know what I have seen; but I have seen enough to make me admire this great man as a leader and as a good person.

We tend to become like those whom we admire if we really look at why we admire them. A leader chooses his or her heroes carefully.

I have a deep sense of gratitude for the privilege I have had to work with Dr. Philip Pumerantz, and for the example he has provided to us. His legacy is one that will benefit all of us.

1 thought on “Tribute to a remarkable leader”